Home   >
How Does a Firewall Work

What is a Firewall?

There are many things that a firewall does apart from acting as a wall between your private network and the public network (internet.) For starters, it can launch counter-attacks against hackers and malicious programs through IP spoofing, antivirus, and antimalware activities. However, there's more than meets the eye.

Fundamentally, firewall as a software is a set of protocols and instructions that tell it what is supposed to block from accessing the private network. Basically, these are programs written by the manufacturer that dictate the type of data that should be marked as safe and one that should be blocked. Essentially, this set of instructions can be altered depending on the user. For instance, the type of protocol required in a big institution is not similar to one needed for a home. However, most firewall Softwares come with default settings to offer maximum security for the less tech-savvy people meaning less customization. 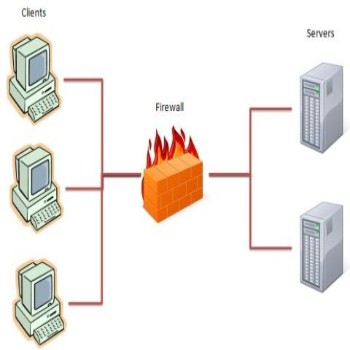 How Does a Firewall Work?

The firewall filters the data in packets. Packets are small pieces of data broken down for easier scrutiny. By checking these packets, the firewall is able to establish a pattern for each packet and identify those that raise suspicion. It also checks the source of the data as well as its destination, the internet protocol addresses, and other ports to determine whether it fits a clean bill of health. It then ensures that both the source and internet protocol addresses match. Since some clients may use different applications and devices to access the server, the firewall may also use a Transmission control protocol to keep track of the movement of the data.

Firewall, and especially firewall hardware, works as a proxy server between clients and servers in a network. Essentially, the firewall hardware works as an intermediary between a computer in the network with the rest of the computers or servers in the network. When a computer requests for data/information from a server or another computer, it sends out the request to the proxy server. The proxy server then relays this request to the relevant server and asks for the information without revealing the requester.

Once received, the data is transmitted to the requesting computer. This way, the two computers do not know who they're communicating with but both of them have delivered the information required. This is important in internet security to ensure computers are not identifiable by hackers. And for hackers to attack a computer in a private network, they'd have to pass through the proxy server which in this case is a firewall hardware that will block all their requests.

With stateful inspection, the firewall is not only checking the packets of data, but also the state of their connections between the relevant computers. It goes beyond just filtering to actually tracking the transmission of the data, its source, and destination to establish their safety. Only packets of data that meet the prerequisites set by the network administrator are allowed to be transmitted.

A DoS attack happens when a server is overwhelmed by unnecessarily excessive requests usually launched to prevent the resources and data to be transmitted to their intended users. The server, therefore, focuses on processing this bogus traffic while legitimate users are denied access. While the server is focused on processing these requests, a hacker can then access the private network by exploiting loopholes and open ports to launch other targeted attacks. A good firewall will help identify DoS attacks by checking the patterns of requests being sent to a server and establishing their authenticity.

Get the best firewall software from Comodo and experience internet security like never before. You will also have access to extra functionality such as antivirus, antimalware, auto-sandbox technology, antispyware, bot protection, DoS protection and much more You're guaranteed 100% protection all year round all at an affordable cost of $29.99 a year. With regular updates and with 100% verdict 100% of the time, no cyber-attack will succeed against you.